Dig This With Deb

DIG THIS WITH DEB 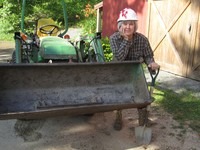 My best intentions eight months ago was to have a monthly column to keep people up to date with the building progress. Little did I know how consuming a project of this size could be. Now that the project bid documents have finally ‘hit the streets’ on Friday July 15 calling for contractors to submit bids and we are gearing up for the move to the Senior Center, I thought I would take a breath and share where we’re at.

Many, many hours have been spent by the library construction committee reviewing the plans over and over and making decisions. Some have not been pleasant as we were determined to keep everything within budget and the price of steel has skyrocketed over last year when the original estimates were done. Cuts and adjustments were made on the recommendation of the two cost-estimating firms engaged to determine the probable bid price and bring us back within budget. Probably the most painful decision was not being able to select geothermal as our heat source. While it is the most cost efficient and long-term energy saver, the initial first cost was just too steep for our budget. Kudos to Hal Gilliam for initiating an RFP to solicit alternative ways to purchase geothermal for the library and town hall over the long term. Unfortunately, we did not receive any viable bidders but it was a great effort.

A unique bird’s eye view of the construction will be available thanks to volunteer Matt Boughton of AOTV who is setting up a timed webcam at town hall to take photos of the construction as it progresses which we can hopefully broadcast on our website.

Next time I will talk about upcoming events and details of the move!